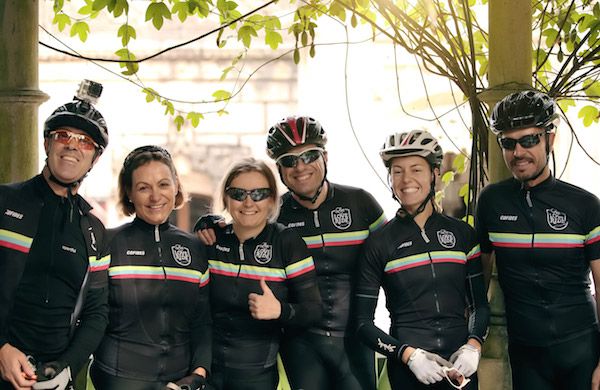 Cycling the camino, the Way of St James: A bike tour in the Camino of Santiago de Compostela from Porto, in the central path.

Cycling the camino is an epic journey turned bike tour, that started in the 9th Century with the discovery, in Galiza, of the remains of St. James. In 1325, the Portuguese queen Isabel made a pilgrimage to Santiago following a route very similar to the one that today is marked with yellow arrows, crossing the then recently built Barcelos bridge; Now it’s your time to trail the Way of St James.

Start cycling the Camino in the city of Porto, settled in the 4th century during the roman occupation, visit its UNESCO world heritage sites and its unique traditions, architecture, port wines and cellars. Riding the Way of St James, you'll feel like a citizen of the world, where several languages are spoken as one, passing through amazing medieval villages like Ponte de Lima, Barcelos and Valença, with typical traces from the northern Portuguese architecture and art.

The portuguese way of St James is made of trails and dirt tracks, ancient roman roads, municipal roads and even alongside modern roads. It’s of an enormous diversity and there’s always a surprise on every bend.

Immerse in the scenario of Minho and Galicia, while cycling the Camino, the roads and trails of the woodland areas, small villages and “pueblos” that still seem to be in the Middle Ages. Enjoy this regions’ gastronomy, rich in variety and flavor, a true feast for your senses. Taste the Port and Green wines, so typical of the Minho region and stay in some of the best hotels in the Way of St James.

Arrive in Santiago de Compostela, designated UNESCO world heritage site and admire the shrine of Saint James at the end of your pilgrimage.

Cycling the Camino, the Way of St James, from Porto to Santiago de Compostela, using ancient paths that traverse woods, farmlands, villages and historical cities like Barcelos, Ponte de Lima, Tui and Pontevedra. This is a 7 day bike tour in the roads, trails and paths of St James, passing by chapels, churches, convents and the ever-present road markings in the North of Portugal and Galiza’s great cultural heritage.

Transfer in from arrival airport to start of the tour and transfer out from end of the tour to departure airport
6 nights in charm 4 star hotels, in double/twin bedroom with breakfast included
Rental of a Road, Touring or MTB bike (Scott Addict 20 or Scott Aspect 930), helmet and spares;
Detailed briefing, bike fit and routebook provided before the tour by a local guide
Personal guide accompanying your group, providing restaurant reservations, booking of local experiences and all passenger transfers throughout the tour;
Support vehicle (SAG Wagon) throughout all the rides
Luggage transfer between hotels
Nutrition, hydration and snacks during our rides;
Garmin GPS with preloaded daily tracks
Access to the Live Love Ride app, that you can use to navigate and explore the best this tour has to offer
Personal accidents insurance during our tour
Portuguese mobile cellphone for contact with your local guide
Live Love Ride Jersey