The hills are alive with the sound of cyclists

While working at the hostel I booked and recommended a lot of bus tours for people with the tour companies in Salzburg, but I saw that some people weren’t totally satisfied with this impersonal and commercial way of seeing the city.

In time for the next summer, full of ideas and ambition and after cycling every single road and bike path to find the best route for you, I left my job at the Youth Hostel and my Scottish wife and I started Frulein Maria’s Bicycle Tours. We had found a way to bring our guests close enough to touch all the sights... even in Salzburgs old town where cars, let alone buses aren’t allowed. We started with just ten bikes, but we soon had to buy more!

Since starting in 1999 they have had the chance to show thousands of tourists this beautiful city and sing along with them in the footsteps of Frulein Maria. 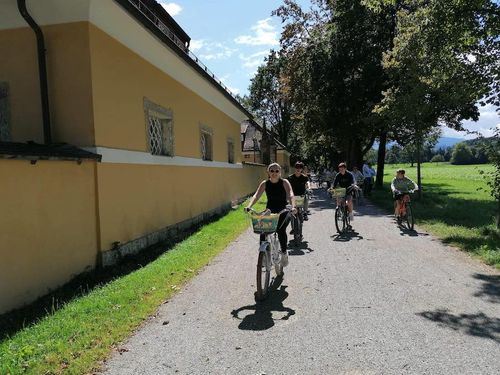 Have you just arrived in Salzburg? Or are you planning to come to one of the most beautiful cities in the world and want to see as much of it as you can?

Did you grow up watching the Sound of Music and are dying to see where those beloved scenes were filmed?

Then this tour is for you! We, Salzburg's only bicycle tour, charge less than the bus tours, but offer you so much more. We take you to places other tours will only show you from the road. We take you to locations buses can't even reach.You don't need to be a The Sound of Music fan, or even to have seen the film to love our tour!

Our guides aren't bike racers or stubborn history freaks, but they love the movie and being outdoors, they know the city and most importantly they love sharing their passion with you. We have a mix of native English speakers and original Salzburgers in our team, and this combination might be one part of our success.

We use Cruiser bikes with 7 gears and very comfortable seats. Your arms will be well stretched out and your back upright!

The most difficult thing about the tour is forcing yourself to get off the bike at the end of the day and back on your feet =). We know how boring long bus drives are for kids so we love having families come along! We have a wide range of different sizes of children's bikes. For boys and girls who can't yet ride on their own or don't feel confident we have child seats, trailers, tag along trailers and a tandem. We have helmets for the kids, and for adults on request. So bring your kids... and drag your husbands... we love them all. We have even had some dogs coming along with us too! If you don't feel confident riding alone we also have an adult tandem bike available to double the fun!We have them in ladies and men's styles. Each bike is kitted out with the name of one of the characters from the film, a basket that can carry up to 5 kilos (11 pounds) and the best feature of all - a huge Fräulein Maria Ding Dong Bell making you unstoppable...