Aquitaine in a nutshell - a bike tour in the Gironde 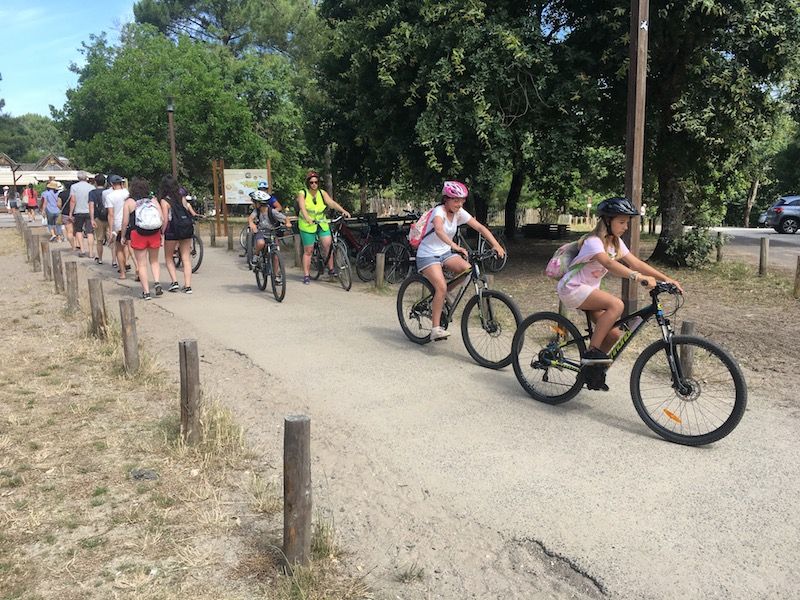 For a relatively short self-guided bike tour of five days (four of cycling) this adventure from Biking France (RandoVelo in French) certainly promised a lot. The tour is titled Between vineyards and pine forest - Bordeaux to Arcachon and actually covers four of the key elements of France’s largest region Aquitaine, now rolled into the even larger Nouvelle Aquitaine région – city, beach, forest and vineyards. All this in quite a compact area to the west of Bordeaux, in the Gironde department.

The first night was at a lovely and very central hotel in Bordeaux. There is no cycling scheduled and the bikes weren’t delivered until the next morning. However you can check in anytime from 3pm and use the excellent and cheap VCub bike share scheme to explore the city – there is a docking station close by. Bordeaux is very cycle friendly and a bicycle is a fantastic way to get around.

The day starts with an easy ride out of the city to the north - well sign-posted with only a couple of minor turns until we reached Blanquefort. On the way is Bordeaux Lake, the home of many sporting activities, both on and off water, as well as the Exhibition and Convention Centres and the casino.   Further north (some bike paths, some quiet roads) the surroundings became more rural with an increasing number of vineyards. There were some small towns and villages including Le Pian Médoc where nearly everything was closed but we were lucky enough to find a nice brasserie for lunch a little further on in Arsac – and had the menu du jour (a set menu with 3-4 choices and 1-3 courses – a standard throughout France). A key thing to know about France outside the cities is that restaurants usually close at 2pm so you need to allow plenty of time.   We rode on to Margaux (despite a few misturns - more due to being directionally challenged rather than to the maps and cue sheets provided which were very thorough). A relatively short day meant we were in Margaux by early afternoon so decided to ride further north into the Médoc. However we gave up by the next town, Soussans, and turned back as there was only one road with quite a bit of traffic, often-fast moving, and no shoulder whatsoever. It’s understandable why the next stage of the tour goes a different direction! The Médoc wine region may be very popular, but is sadly lacking in cycling infrastructure.   Fortunately Margaux itself offers a great insight into the region, and the Haut-Médoc in particular. It has a high concentration of magnificent chateaux such as Chateau Margaux, Chateau Labégorce, Chateau Marquis de Terme and Chateau Palmer - and we had to check out nearby Chateau Rauzan-Segla as that was the name of our hotel room! There was also a Maison du Vin (House of Wine) at the edge of town which is a tourist office for wine lovers.   A return visit will be needed for proper visits and tastings as this tour is only enough to offer a glimpse into the region.

48km (though sticking exactly to the itinerary would have been 34km).

We again left our luggage at reception to be picked up – so great not to have to carry it all on the bike (as I’d done for the last few weeks!). It was a nice ride out of Margaux to Aversan, albeit on the main road with some faster moving traffic – though motorists are much more accepting of sharing the road with cyclists than in some countries.   South-west from Aversan, we leave the vineyards behind and enter farming and forestry areas, on successively smaller roads with less and less traffic before meeting the Bordeaux-Lacanau bike path at Salaunes. Now there were no cars, just bikes on mostly rail trails or greenways with long straight sections (all sealed) through wooded areas. Very few villages and these were off the path, until Lacanau-ville where there were a few well-signposted turns to Lacanau-Océan. The latter is a nice seaside resort, not over developed, with plenty of reasonably priced bars and restaurants. It had a nice beach although there are probably better ones further up and down the coast - albeit not so convenient.   A lovely pool at another great the hotel allowed us to chill out and rest/nap at after the ride. We had a 10 minute ride into town for dinner - all on bike paths - although there was also a restaurant at the hotel. The hotel’s secure storage for bikes was also welcome.

Another good breakfast and a very easy exit from Lacanau-Océan onto the bike path heading south. The route is through forest all day with numerous access points to the beach. We did take one and went for a much-needed refreshing Atlantic swim on a hot day. Be prepared though as the dunes are very large and there will be quite a walk from the path to the beach.   The dunes are protected by the magnificent forests that were originally planted in the 19th century on then existing swampland. This reforestation was for done for commercial purposes but also protects the Médoc wine region from wild Atlantic winds.   The path winds its way down to Cap Ferret and, though beautiful, seems interminable as the cape or peninsula is quite long. One of the most popular spots in town is the historic lighthouse. The ferry to Arcachon was very popular (and full) so leave plenty of time to queue and board! The highlight of the 30 minute crossing is the views of the huge sand dune. Our hotel in Arcachon was close to the ferry terminal, though was rather disappointing given the high standard of accommodation so far on the tour. The town is rather touristy and away from the waterfront didn’t seem to have a lot going for it.

A 24km loop ride was scheduled for today - the last of the tour. Leaving Arcachon out the south east side was a bit confusing as there is no cycle route as such - and we didn’t follow the map or cue sheet closely enough! Once past La Teste it was pretty straightforward if not particularly interesting – although the wetlands may be worth a small detour.   However that all changed when we reached the Dune du Pilat though as we didn’t really know what to expect, we almost headed straight back to Arcachon and the train. Fortunately we did turn into the Dune to check it out anyway as there seemed to be a lot of people going in and the day had cleared up nicely after a grey start. We had dismissed the sighting from the ferry yesterday at ‘that’ dune didn’t look particularly accessible.   Wow – we were wrong. There was quite a big visitor area with lots of parking and the usual souvenir and ice cream shops. Lots of bike parking too - great to see several groups of kids on bikes. The Dune itself is very close by – turn the corner and you are faced with a mountain of sand. They have installed a concrete stairway which many used but it was so much more fun to take your shoes off and tackle the massive dune à pied – though I imagine the sand would get pretty hot later in the day. With enough time, you can actually walk along the top for a few kilometres. The views are amazing with the sun sparkling over the water down below.   We didn’t stay too long as we had to get back to catch the 12.30 train back to Bordeaux (the two later ones were cancelled due to strike action - and trains were only hourly).    An easy ride led into the prettier western side of town - obviously the way most people go to see the Dune as it’s much shorter and there are bike paths nearly all the way.


All in all the tour definitely delivered on its promises and exceeded my expectations. To fit such a variety of settings into just a few days was certainly a fantastic experience that I have no hesitation in recommending.

The author travelled at his own expense

The 'Canal des 2 Mers': from Bordeaux to Sète

This bike itinerary leads you along the Canal de Garonne from Bordeaux to Toulouse. Then, you will join the Canal du Midi, UNESCO World Heritage, to the Mediterranean Sea. You will follow this ancient canal towpath, converted as a promenade and discovery space, to share with walkers and boaters.