The London Bicycle Tour Company was founded by Robert Graham in 1991. It was London`s first ever bike tour. Many competitors have since come and gone, but they have remained as Londons premier bike tour operation. Since their inception 21 years ago, theyve seen over 100,000 happy customers take a guided bike tour with them.

They have six different tour routes covering all different parts of London, the great city that it is. They offer guided tours in seven different languages, 364 days per year.

They also have the largest fleet of privately owned rental bikes in London, including a selection of male and female hybrids, city bikes, kids bikes, tandems, Mountain bikes and folding bicycles. Theres something for everyone. 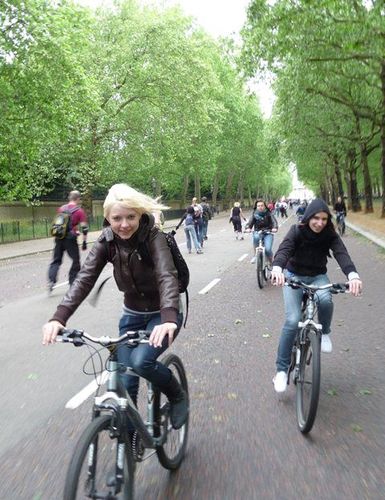 Love London is a relaxed tour through the West End exploring some of the city’s most theatrical, artistic and culturally significant sights.

On the way you'll pass along handsome tree-lined streets and through some of the city's most charming parks.

Your journey starts from our cycle hire and tour centre in Lambeth, conveniently located a stone’s throw away from Lambeth North Underground station. and throws you straight into the heart and soul of London’s cultural and artistic scene.

Definitely our most comprehensive tour, and perhaps our most colourful and illuminating, the night tour is more cycling and less talking.

It'll give you a special perspective on the city, as the sun sets and day turns into night.

After collecting your bikes at Gabriel Wharf, you'll head east along the south bank of the Thames towards Tate Modern, the old power station at one end of the once, wobbly Millennium Bridge. From there you'll ride with the pedestrians past the Globe Theatre, from where you'll have spectacular views across the river to St Paul's Cathedral, as it bathes in the pinks and oranges of a London sunset. Onwards to Borough Market, you'll negotiate narrow passageways dotted with historic watering holes - that only a seasoned leader could successfully guide you through, before stopping to admire the 19th-century architecture of London's oldest food market. Across some cobbles and you'll be back on the riverbank, with the Tower of London dominating the other side.

From there, it's smooth tarmac all the way to the Mayor's office, with its oddball design, and from where you can't miss Tower Bridge. On the other side of the famous old river crossing, just past one of the last remaining segments of London's Roman wall, you'll enter the financial district. Among the City's highlights, you'll get up close to the Lloyd's building and its remarkable exoskeleton. Next stop is St Paul's Cathedral itself, after which you'll follow some atmospheric old paths before joining the slick Cycle Superhighway and heading down, one speed bump at a time, towards Westminster.

If everyone's on time, you'll ride past Big Ben just as the clock strikes nine, and stop to take in the majestic sights of the UK's political heartland. Past St James's Park and Horse Guards Parade, there's another stopover at Trafalgar Square, the geographical centre of town. The cultural hub of Covent Garden is your penultimate stop.

Be ready for streets teaming with locals, tourists, performers and artists, all eager to stretch the amusement further into the night. Finally, it's back to the South Bank via Waterloo Bridge, where the lights will finally come down on this particular night out. 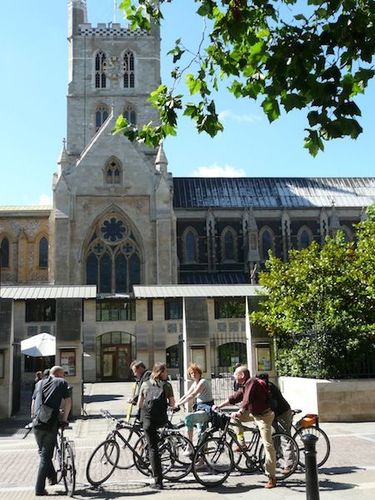 Old Town Tour, focuses its attention on the east of the city, heading out towards the old docklands and back through London town.

This carefully chosen route gives you a local's knowledge of London's power house.

Your journey starts with a ride to the old Bankside power station, now home to Tate Modern Art Gallery. A few doors down from there is the New Globe Theatre, a beautiful, curvaceous replica of an Elizabethan theatre made famous by William Shakespeare.

Next you'll be taken to Borough Market, one of London's largest and oldest food markets, offering a selection of the city's best street food and fresh local produce. Then, provided there are no ships passing through, you'll be off to cross the picture-postcard Tower Bridge, all the while taking in the spectacular London skyline with its newly iconic skyscrapers (the Gherkin, the Walkie Talkie and the Cheesegrater among them).

From there, it's a ride along the river to the old Dockyards, an atmospheric maze of warehouses and alleyways, including a quick stop at Captain Kidd, a waterside pub. Starting to head back west to what used to be less affluent industrial land, you'll see how the area has been transformed into a destination for young designers and their businesses.

Then it's to the Square Mile, London's financial district. Passing through a bedrock of institutions such as Lloyds of London, the Royal Exchange and Mansion House - each of them a delight for architecture enthusiasts. Last stop is Sir Christopher Wren's unrivalled masterpiece, St Paul's Cathedral. Your guide will then lead you back to the Wharf along Carter Lane one of the cities beautiful hidden secrets. 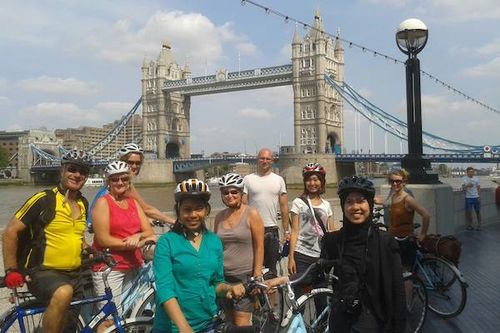 The Classic Tour is our most popular ride of central London, covering the classic sights that light up the capital's skyline from Westminster to the City of London.

Your journey starts from our base in Lambeth, central London. Here we will equip you with a bicycle and safety gear, and you will be introduced to your guide. They will lead you on backstreets and cycle paths to some of the most iconic landmarks in London - discover royalty at Buckingham Palace (and maybe even see the Changing of the Guard!*,) admire the street performers in Covent Garden and marvel at the grand architecture of St Paul’s Cathedral.

On your bicycle, you will cover ground not possible on foot whilst discovering streets which would be impossible to see via bus. Your guide will not only talk you through London’s amazing past, but will also shed light on tips and tricks only a local would know!