Along the Elbe River to Prague 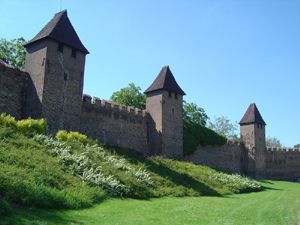 One of the easiest routes with very flat terrain following Elbe river¬¥s bank.

Although each year are added special paved cycling path section whole route leads mostly on roads without or low traffic.

Take a ride down from the top of the highest mountains in Czech republic - the Giant Mountains - to our capital city of Prague. This route along the Elbe River will take you through natural reservation and a picturesque dam, Les Kralovstvi, where fairytale feelings will surround you. After a night in Dvur Kralove you will cycle through the rich cultural site of Kuks. As well as Braun´s sculptures of Virtues and Vices, it is well worth visiting a unique Baroque monument comprising a spa, a chateau and a hospital with a drama theatre. For another night we stay in one of the oldest settlements in Hradec Kralove. It is then a short distance to another important city of eastern Bohemia, Pardubice, giving you plenty of time to visit Kuneticka Hora, a castle on an 80m high hill surrounded by flat farmlands, and the nearby Museum of Fairy Stories and Ginger Bread. We will stay the night in the city of Pardubice. This city is well known for the annual Velka Pardubicka Steeplechase.

Over the centuries, picturesque towns and villages have grown along the Elbe River like shiny and lustrous pearls threaded on a string. After a lazy day you cycle from Pardubice to Kutna Hora, city with a long history and on UNESCO Heritage list. Through Podebrady - a famous spa town with healthy carbonic mineral water you cycle to Nymburk. Do not forget to take a look at its preserved ancient brick fortifications here. Those interested in history and architecture should make a stop at the open-air museum in Prerov nad Labem on the last cycling day. From here the recommended cycling route will then lead you directly to your hotel in the centre of Prague.