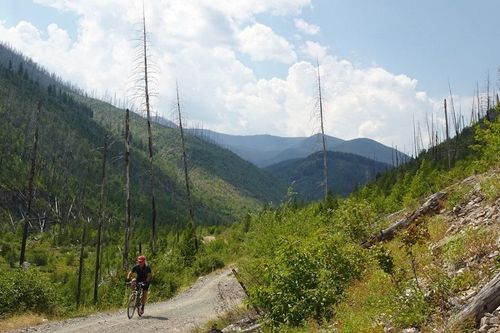 The American cycling Dream: crossing the United States by bicycle.

Many riders have cycled the United States from East to West or the other way around. Of course, a great achievement.

It is probably a bigger challenge to traverse the United States from North to South over the dirt roads of the Rocky Mountains, following the Continental Divide. The divide of roughly 2,800 miles between Canada and Mexico splits the North American Continent in two. Drops of rain that fall on your left side flow into the Atlantic or the Gulf of Mexico. Drops on your right side will find their way to the Pacific. The drops of sweat from your brow will evaporate in the thin air of the Rocky Mountains or fall to the trail and eventually make their way to one of the two great Oceans. This is the trail of “The Great Divide” !!!

In 1998, the Adventure Cycling Association developed and published the world’s longest off-pavement cycling route and called it “The Great Divide Mountain Bike Route”. The original route starts in Banff, Canada, zigzags along the Continental Divide, climbs over isolated passes and finishes in Antelope Wells at the border of Mexico.

The Great Divide takes you through a wide variety of terrain and geographic features. You cycle through isolated river valleys, mountain forests, wide open grasslands, high desert, alpine wilderness, and, at the end of the ride, a section of the Chihuahuan Desert. Along the way you can expect to meet cowboys who drive their cattle across the prairie. You will cycle through pristine woods full of deer and elk, and of course there is always some trepidation that you may stand face-to-face with a grizzly bear. Colorado's Indiana Pass is the highest point on the route at 11,910 feet.